What is it about cinnamon rolls that just bring a huge smile to our faces?!

One family tradition we had was our older sister would make homemade cinnamon rolls each Christmas morning. She would spend hours in the kitchen making the most amazing cinnamon rolls. We can picture them now. Soft, moist and oh so sweet! Yum! 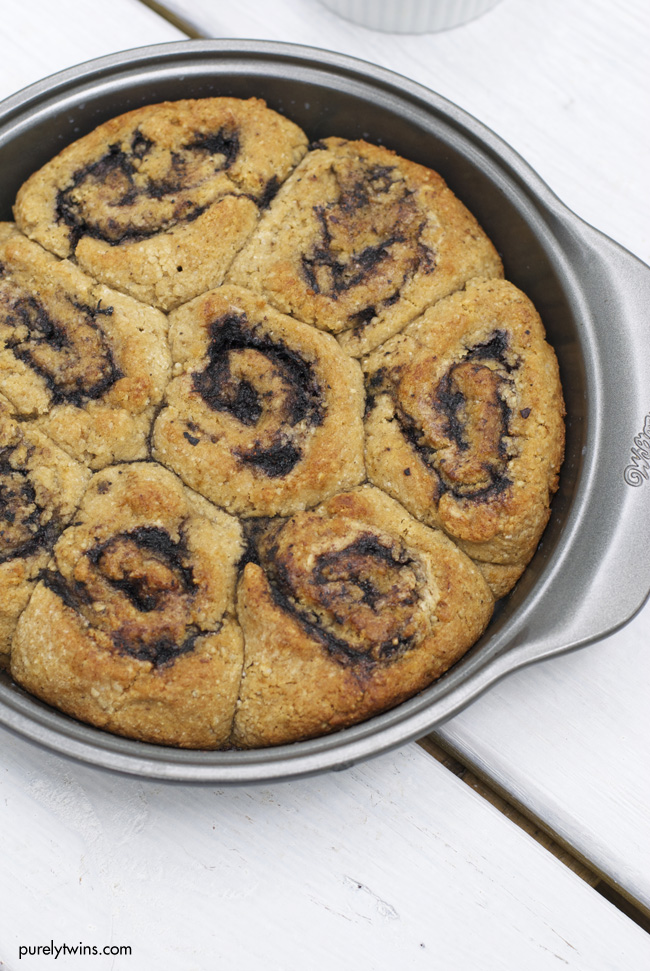 We wanted to create another amazing cinnamon roll recipe. But one without using plantains since we know not all of you can find plantains. And we wanted a recipe for you to enjoy too!  You can take this cinnamon roll base and use it in our cookie dough cinnamon rolls!! Happy dance 🙂

Get ready PT friends for the best cinnamon rolls! Well, the best in our eyes.

See a video of us making gluten-free vegan cinnamon rolls.

These cinnamon rolls are soft, moist, easy to work with and taste like a peanut butter & jelly but with almond butter. You could use peanut butter if you like!

Really any nut or seed butter would work just fine. 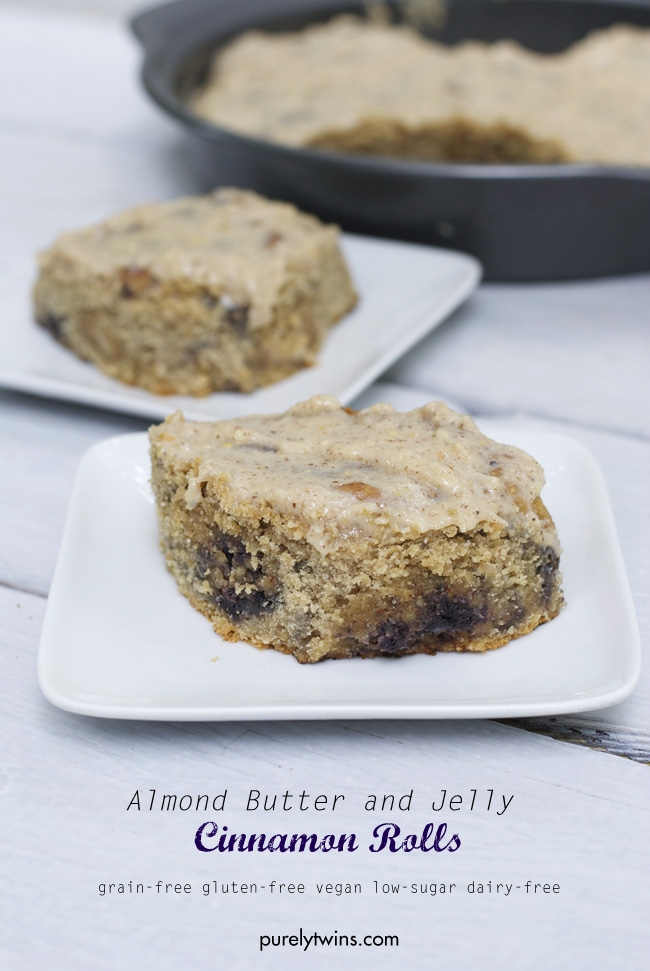 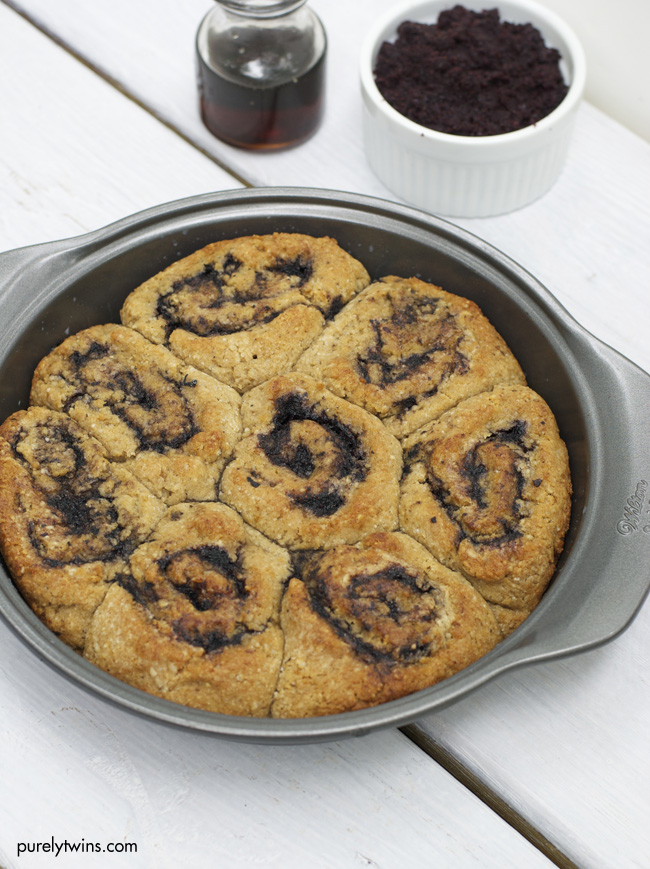 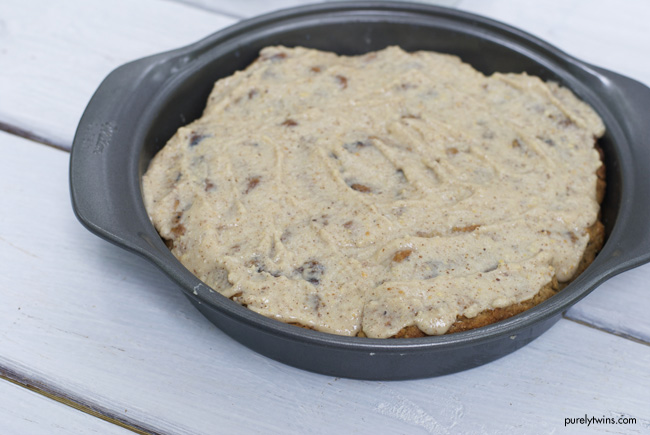 No confectioner sugar needed in this glaze!!! 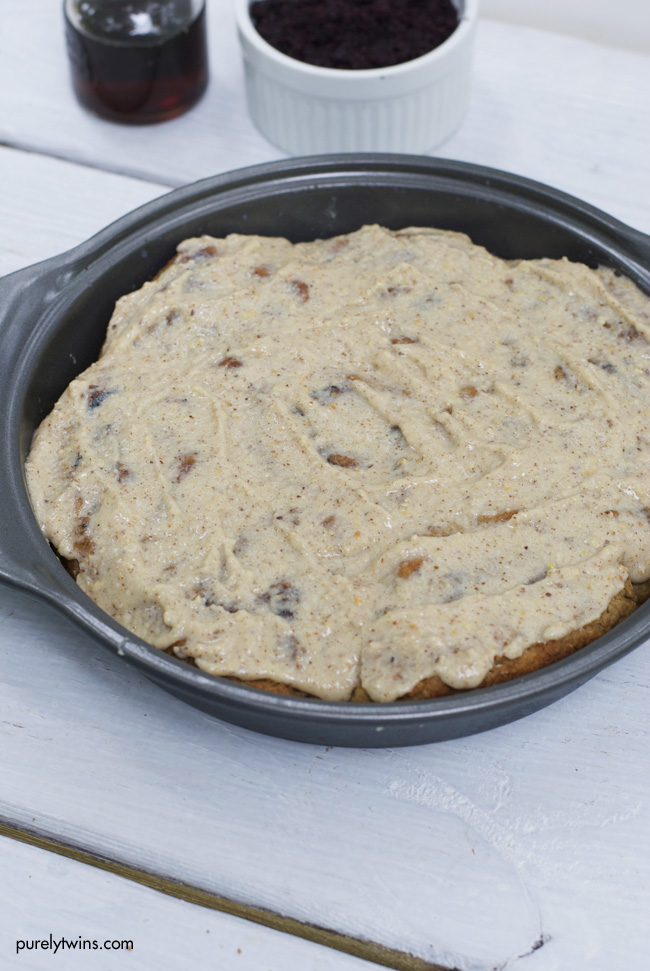 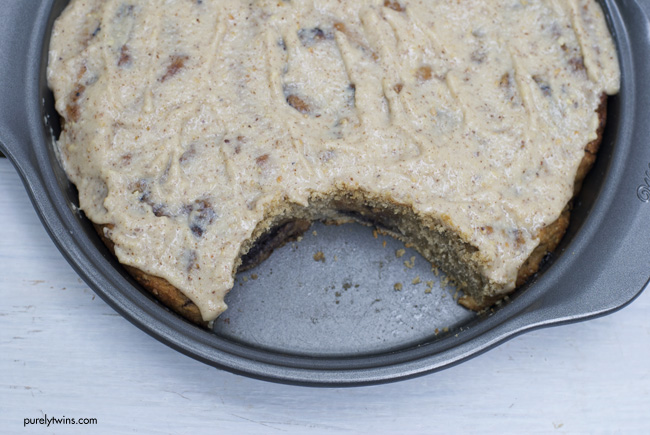 And a touch of coconut flour gives it a nice soft crumb. 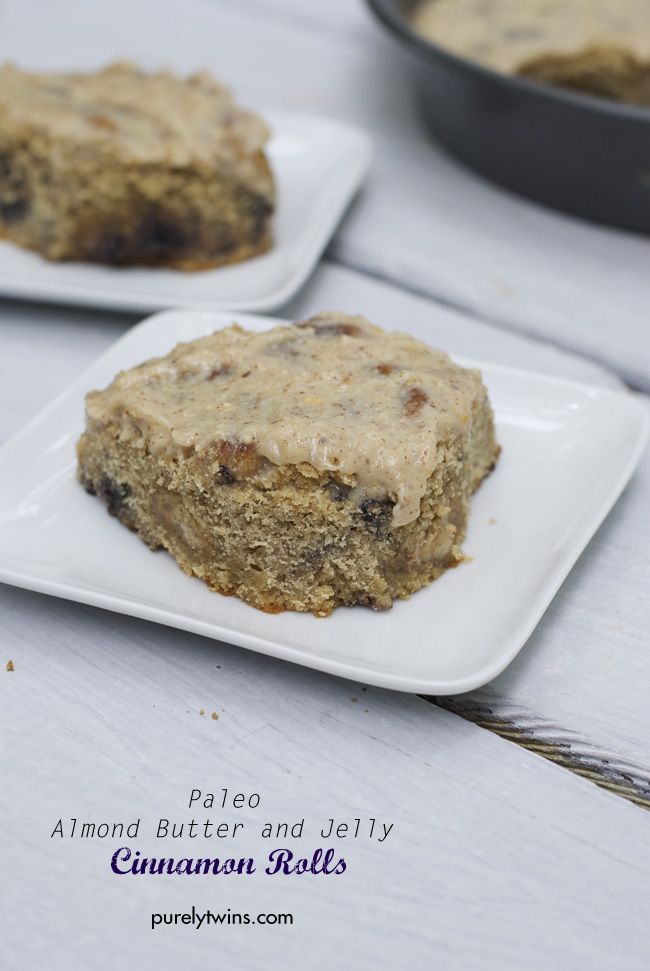 See how we make cinnamon rolls here in this video.

Instead of sunflower seeds use any nut or pumpkin seed meal.

Instead of arrowroot use a combo of tapioca and potato starch (we suggest a combo since, if using too much tapioca, it can cause too much chew and the potato starch will provide lightness).

Instead of almond butter as filling you can use peanut butter, sunflower butter, cashew butter…

Instead of applesauce use sweet potato or banana puree.

For the jelly filling, to keep it vegan, use vegan jelly of choice or use arrowroot instead of the gelatin. 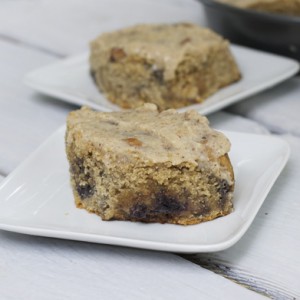 Who wants some almond butter and jelly cinnamon rolls??

Tea or coffee with them? Or a glass of milk 😉

Go make these cinnamon rolls now and save us one!

{pregnancy} week 19: what I ate yesterday

Hey girls, love this recipe!! I think there’s something going on with your homepage, I haven’t been seeing recent posts for a few days and then they all pop up for a little and disappear. Just letting you know! <3

Georgia, yes we had a few others emails us about that. We are not sure why, so we are working with our hosting and web person to figure it out. Please keep letting us know if you keep having issues.

Oh my goodness – this might be one of the most mouthwatering recipes you’ve posted. Can you send me some now. 🙂 I don’t eat a ton of complex carbs like this in my daily diet…but maybe on high carb day. Hmm….

Wish we would send you some Heather!! Good luck with your competition training.

i agree! YUM!! and did you make the sunflower seed meal?

yes we just grinding whole sunflower seeds in our blender, you can use coffee grinder or food processor 🙂 thanks!

holy crap these look amazing!!! I have to make these ASAP!

Yum! These look so delicious! I love almond butter but have never tried coconut butter. I bet I’ll like it since I love everything coconut!

I don’t know how I missed this earlier last week! I’m dying!! These look amazing girls!

ARE YOU USING CARTON COCONUT MILK OR THE CANNED? AND CAN COCONUT FLOUR BE SUBSTITUED WITH ANY OTHER FLOUR AS IM OUT OF IT FOR TIME BEING 🙁 THIS RECIPE LOOKS SUPER AHHMAZING!! ITS NICE TO KNOW THAT IM NOT THE ONLY PERSON IN THE WORLD THAT HAS DIGESTIVE ISSUES AND IT SEEMS TO CHANGE DAILY, SO TIRING AND CHALLENGING!!

Lynn you are not alone 😉 We only use canned coconut milk as it tends to have less ingredients than carton ones. Honestly for the coconut flour there really is no replacement. If you do not use it, you might have to reduce the liquid in the recipe as coconut flour absorbs it

Can you sub the coconut sugar for stevia in the buns?
Thanks so much!!

not sure, as the coconut sugar gives the buns some volume, if you take it out to use stevia you need to use something use to replace that volume.

Could you provide the macros for these? That’d be great!

Hello gorgeous girls (inc baby M)! I just made your rolls tonight, I’ve been wanting to since you posted them. OMG delicious! I substituted apple for pumpkin, almond milk instead of coconut, added vanilla powder, cinnamon and cardamon, I don’t use sugar so I left out the coconut sugar, and I don’t use baking powder (I only ever use baking soda) so I left that out too, which leads me to my question. I’ve tried google but haven’t been able to find an answer (who’d have thought – google doesnt know everything 😉 ) so I hope you don’t mind me asking, and since you are chefs, what is the benefit of using baking soda and baking powder in a recipe? can I just add more baking soda and more ACV? They turned out really well, they didn’t rise and puff out as much as yours, and is crunchy on the outside and soft and moist on the inside, a little different from yours by the look which I suppose is all due to the baking powder, but can that be changed a bit by adding more baking soda and why do you use both? Thanks so much. Naomi

Naomi they each provide lift to recipes, some recipes you just need one or the other. But we have found with vegan baked goods that need lift both work great. You could try increasing the baking soda and adding ACV. Hope this answers your question.

I just made the cinnamon rolls, I had some trouble to roll the dough,I just kept adding arrowroot,, but oh it turn out great and delicious thank you for another great recipes.

What else I can use instead of arrowroot starch? Does it has some substitutions?

Can I use whole wheat flour in place of your flour in your recipes?

not sure, you could try, we haven’t experimented with that before so unsure of any recipe adjustments.