Oh yes we did…thanks to many of you requesting it. We made cinnamon toast crunch cereal.

We have made a few different recipes of these already and enjoy them all. So good. Keep reading to find out how we made cinnamon toast crunch a bit healthier!

Cinnamon toast crunch cereal gluten-free and egg-free. Plus, free of a few other allergens. It can also be made grain-free

And the main ingredient is a special favorite of ours. Bet you guys already know what it is. 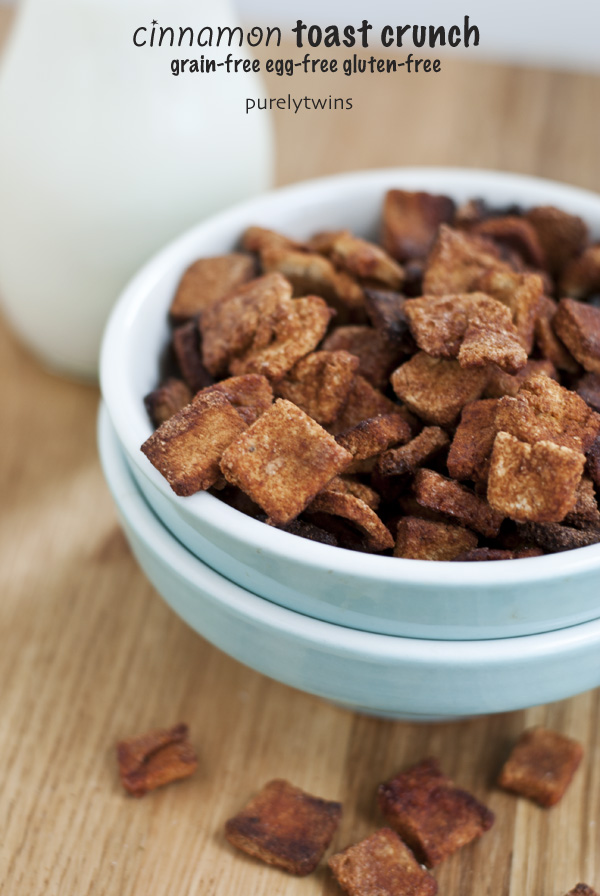 Apparently we are on cinnamon sugar kick. Hey nothing wrong with that, right? 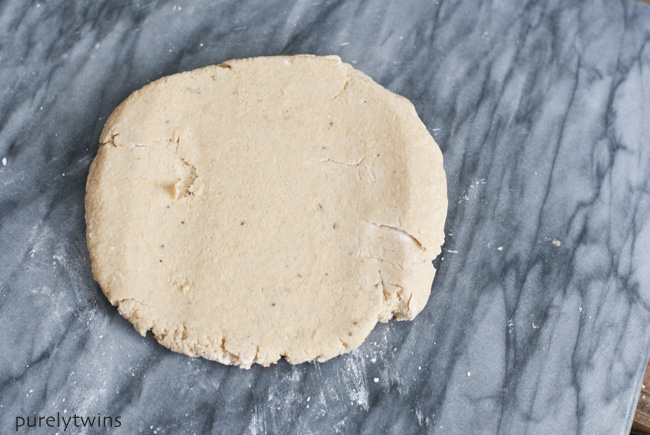 First you need your basic dough. Roll it out. 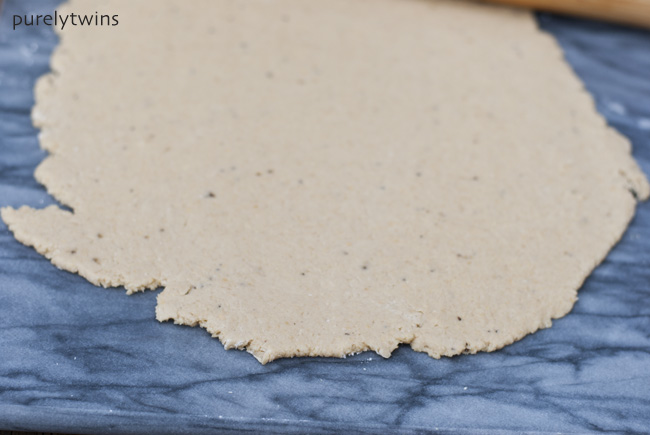 You want to roll it out as thin as you can. The thinner the cereal dough the more crispy cereal… although there is more chances of them burning some. not that we did that 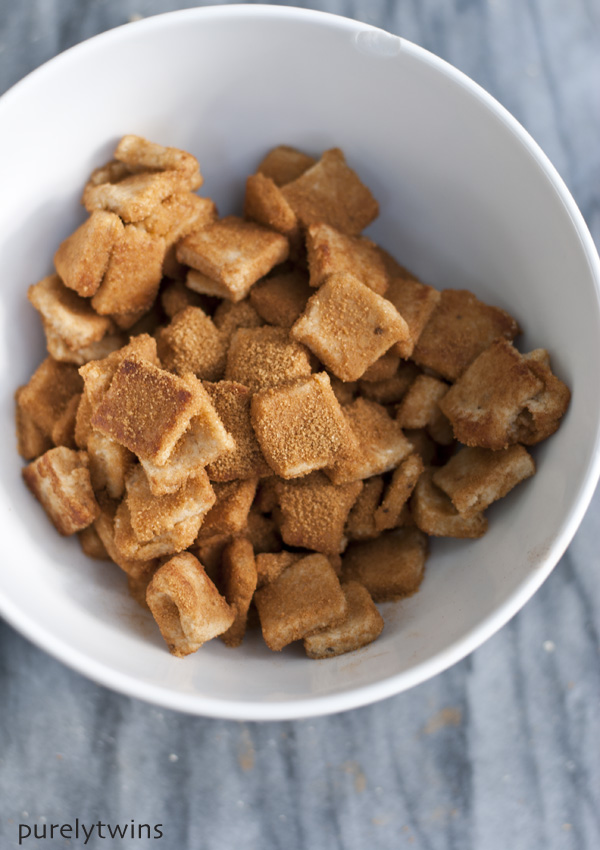 Once your dough is spread thin. Take a knife to start slicing into mini squares. CAREFULLY pick up squares to place in a bowl to toss with cinnamon sugar. The dough might be a little soft. 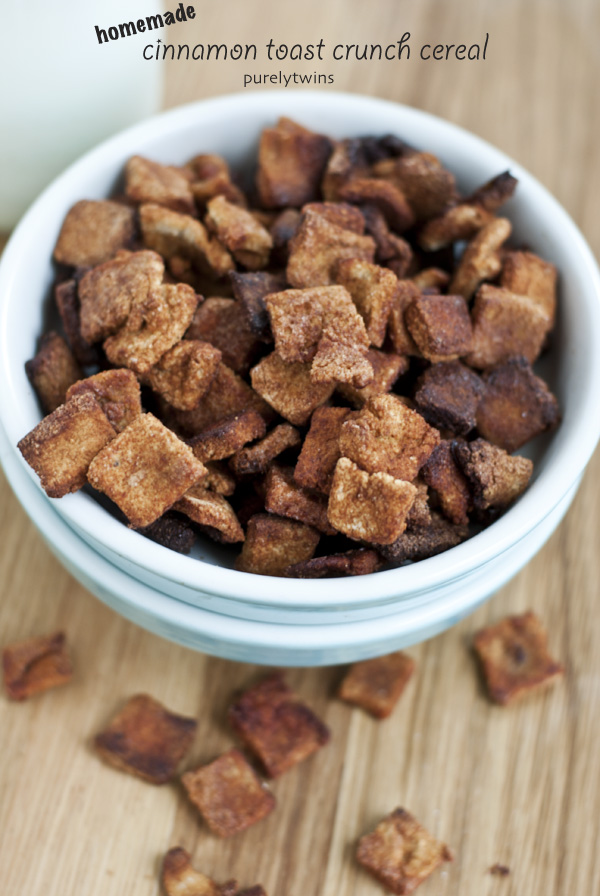 All you have to do next is toss them with cinnamon sugar, place slices on cookie sheet and let them bake in oven until desired crispiness is achieved.

Who knew making homemade cinnamon toast crunch could be so much fun. 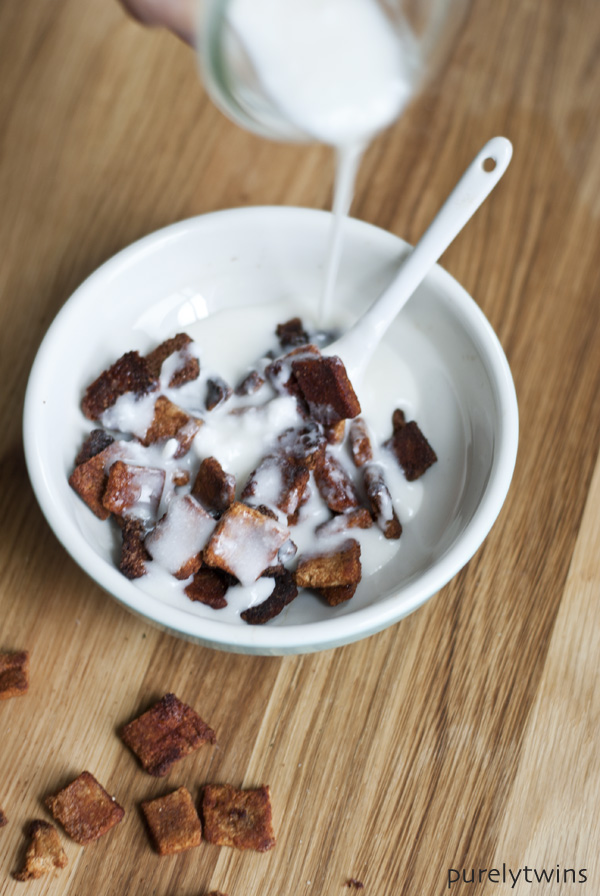 Pour with some cashew hemp homemade milk. Or any milk or non-dairy milk of choice.

And savor every bite.

We found our recipe to be pretty darn tasty for being free of most common allergens. Of course the mix of cinnamon and sugar helps.  But we worked so hard in creating this recipe to be easy and that most people could make.

We also knew that not everyone can get plantains… so we thought of a new recipe meeting that need. You just have to okay with baking your nuts. Using nuts in our cereal recipes does provide more of a crunchy texture.

We try to avoid our nut intake and try to avoid cooked nuts for health reasons. That is why you don’t see us baking with nuts very often. Actually it’s very rare these days. We just rather bake with protein powder over using cooked nuts. Just our opinion. We do love using nuts in our raw recipes. 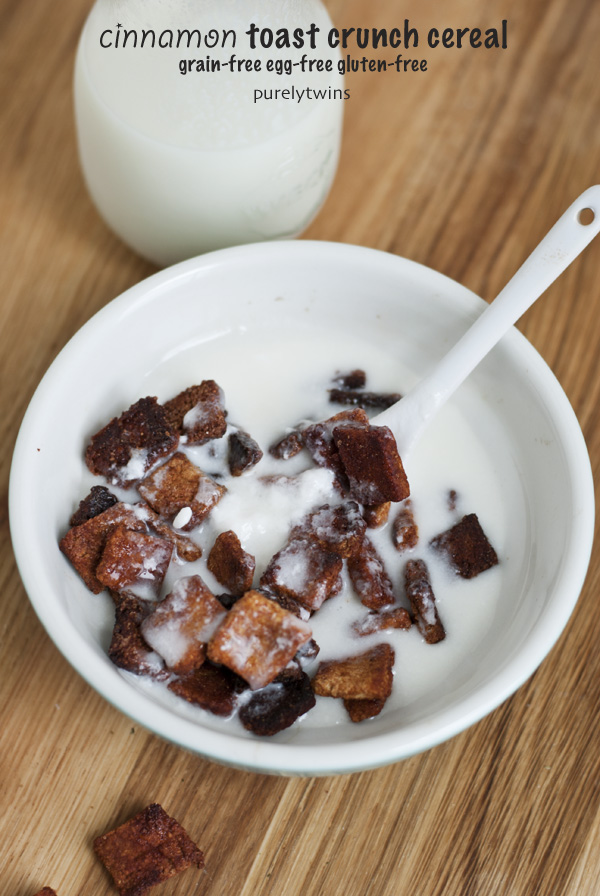 So we hope you enjoy our second recipe for homemade cinnamon toast crunch that is  grain (if you switch out the protein powder or use hemp protein) and gluten free based out of almonds, coconut flour, and arrowroot. 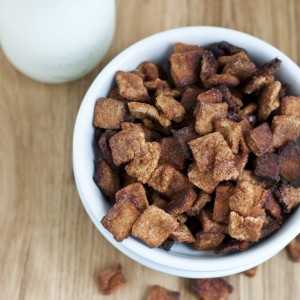 We played around with the plantain free dough and we feel it would work for our vanilla cocoa puffs and possibly our cocoa puffs (just reduce almonds by 1/2 cup and add 1/2 cup of cacao). We got a lot of request for a grain-free option for those recipes.

We hope this helps with providing some ideas.

what’s in our pantry and fridge #purelytalk

Yes! Cinnamon toast crunch is one of my favorite cereals, and I’m so glad that you’ve included two variations of the recipe 😀 The store-bought kind is too sugary for my taste, but I’ll have to try this recipe at home.

Thanks Jojo hope you the recipe!

LOVE Cinnamon Toast Crunch, and I love even more that you came up with a healthy version! Yum!

I am giddy with excitement!!! Totally can’t wait to try these, and super bummed that it won’t be for a while … a major downfall of traveling for work 4 days a week is that when you’re out of town for a weekend, you don’t get to your kitchen for 11 days straight!

Oh no! Wish we could send you some 😉

Best cereal EVER! 😉 This sounds amazing! I can’t wait to try it 🙂

P.S. I couldn’t resist giving you guys a shout out on my blog today!

Oh Liz you are too sweet! Thank you 🙂 xoxo

Looks and sounds delicious ladies! My boys used to love cinnamon toast crunch. They haven’t had it in a long time. I think I need to treat them to a bowl of this!

Hi ladies – should the chocolate and vanilla dough roll out the same way as well? If it is too crumbly should I add more coconut oil or maple syrup? thanks!

Hi ladies – should the chocolate and vanilla dough roll out the same way as well? If it is too dry should I add more coconut oil or maple syrup? thanks!

Ladies this looks and sounds absolutely amazing!!! I LOVE cinnamon and sugar, it’s one of my favorite combos! I can’t wait to try it, I bet Ella would love it!

And thanks for mentioning/spreading the word about almond flour! I get frustrated when I see so many using is as a health food and it really can be damaging to ones health when used as often as people are using it!XOXO

Totally looking forward to breakfast tomorrow because I just made these:) They are tasty!

so glad to hear it Hannah 🙂

Hey ladies so I tried making this today and it tastes delicious, can’t get enough of it, but the texture came out really hard and tough not crunchy :(. I used just coconut flour and arrowroot. Could i have added to much arrowroot? The dough was a little dry even though I added close to another tablespoon of coconut oil (which was liquid I don’t know if that matters). I will still eat it since the taste is good but the next time I make it I hope I’m able to make it crunchy. Thanks ladies I hope ya’ll have a wonderful day!!

Hannah as we mentioned in the post they are more chewy not as crunchy unless you use nuts. We actually found out to make them crunchy store them in freezer.

This recipe looks amazing!
I will try to make it without sugar. I know it will not be the same but it is all I can do for now.
I cannot have arrowroot starch either. Any suggestions to substitute it? Thanks again!

You can use tapioca starch or potato starch for the arrowroot, or cornstarch of you can handle corn.

Even after adding an additional tbsp of maple syrup, this was way too crumbly. However, I bet it’s because I used store-bought almond meal, which is likely drier than your homemade stuff. So, note to others: don’t make the almond meal version unless you make it all from scratch!

Hi there….I want to try the plantain free version but my daughter is allergic to almonds….what do you think about a combination of tigernut flour and chia meal? If you think this will work should I use the same amounts? Let me know your thoughts and I will try out and post. Thank you!

Yes you can use a combination and do the same amounts.

Thank u so much for ur recipes cant wait to try them out…especially the cereal…hopefully my kids will like it since I don’t buy processed foods anymore…they have missed cereal ????

What a healthy cereal recipe! I like the idea of using plantain and protein powder to make it. However plantain is not something we often in my country. Do you think I can substitute it with green bananas?