Who can resist the aroma of freshly baked waffles in the morning with sticky sweet maple syrup? Or for us any time of the day? 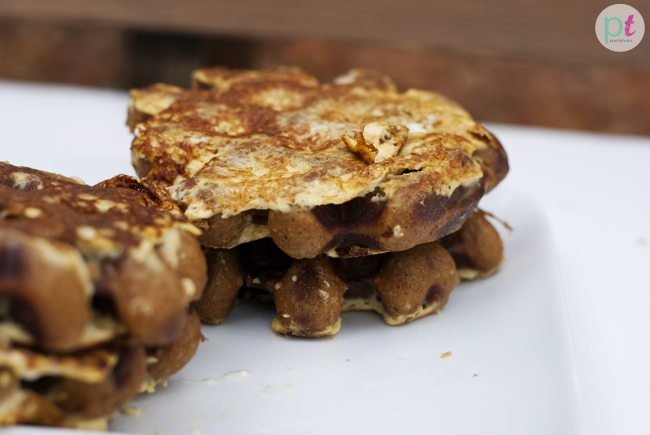 We have shared our love of waffles especially protein packed waffles.

And the funny thing is Michelle and I weren’t big on french toast growing up, again we were pancakes girls. But we did like enjoying french toast from time to time for something different.

We know we are not the first ones to think of waffle meets french toast idea, but we made ours a little differently. More on that below. 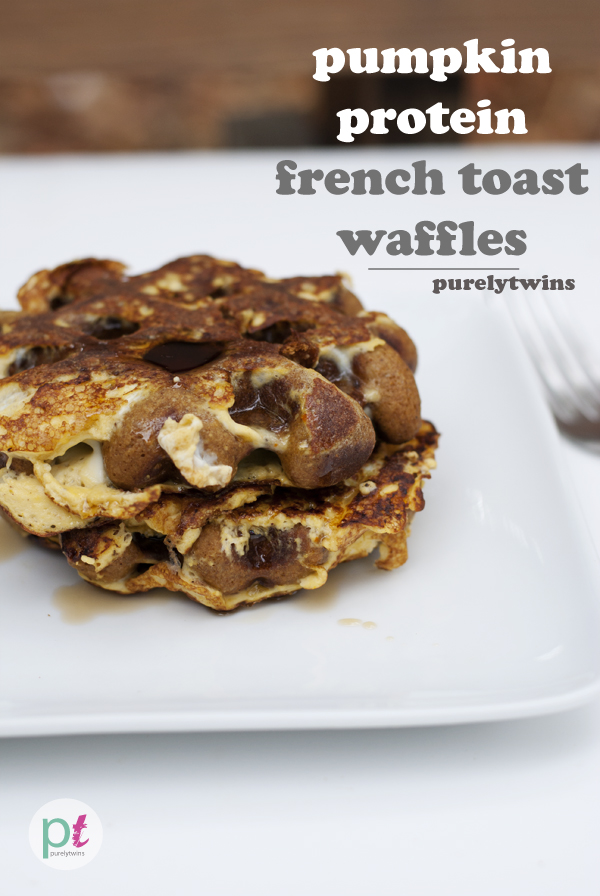 This recipe has been brewing in our minds for a while now and we both were so pleased  with the results! I had made this recipe a few weeks ago for Gary and I, but remade it this morning for Michelle to enjoy!

These french toast waffles turned out as delectable as they look. Light, spongy, not too sweet and hearty enough to be a stand alone breakfast.  It’s perfect for the holidays or a special occasion brunch. 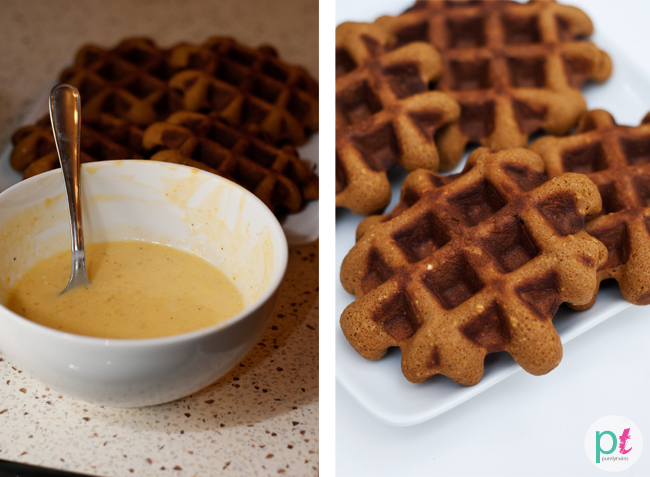 Not your typical french toast which uses leftover and stale bits of bread.  Here we decided to use freshly made waffles.

The first time I made this recipe I was impatient and just went ahead and cooked them on skillet instead of soaking the egg milk mixture in with the protein waffles. When I made them for Michelle today, we decided to try soaking the waffles for at least 30 minutes before we bake them again. And folks, that little bit of extra soaking time made a huge difference. So lesson learned sometimes things are worth the wait.

We took our basic coconut flour protein waffles and added in some pumpkin since its that time of year. For more pumpkin flavor we put some pumpkin puree in the milk egg mixture. Though the flavor of pumpkin is not overwhelming. It lingers there in the back along with the sweetness of the maple syrup and egg mixture.

Gluten-free dairy-free pumpkin waffles made with coconut flour and protein powder. Can be made grain-free. 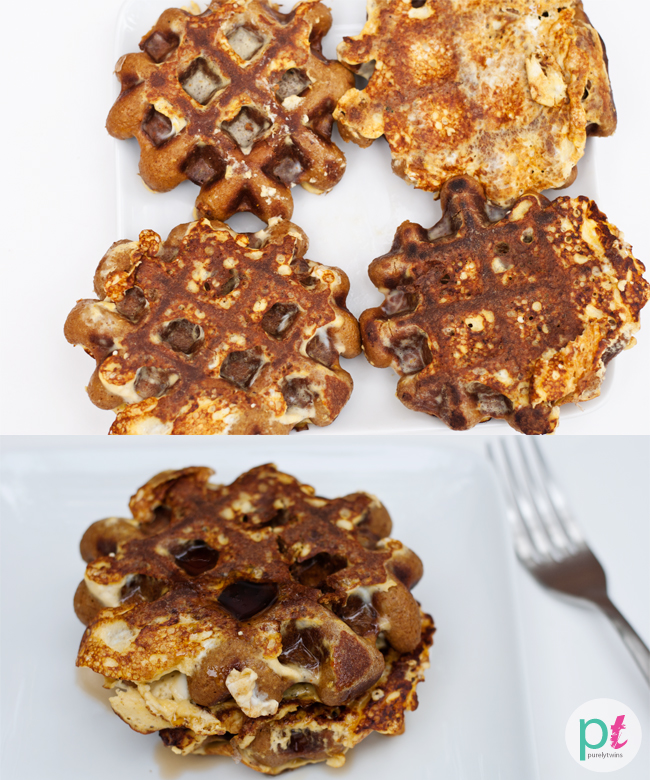 We actually realized we could have baked these french toast waffles again in the waffle maker, but did it on the skillet instead. Next time we will have to make it in waffle maker.

We toasted the french toast waffles in a greased skillet until golden brown on each side. Though folks, these are  not your thin, crispy waffles but instead soft – more  hearty, cake-like style waffles. Just as comforting and drool worthy. 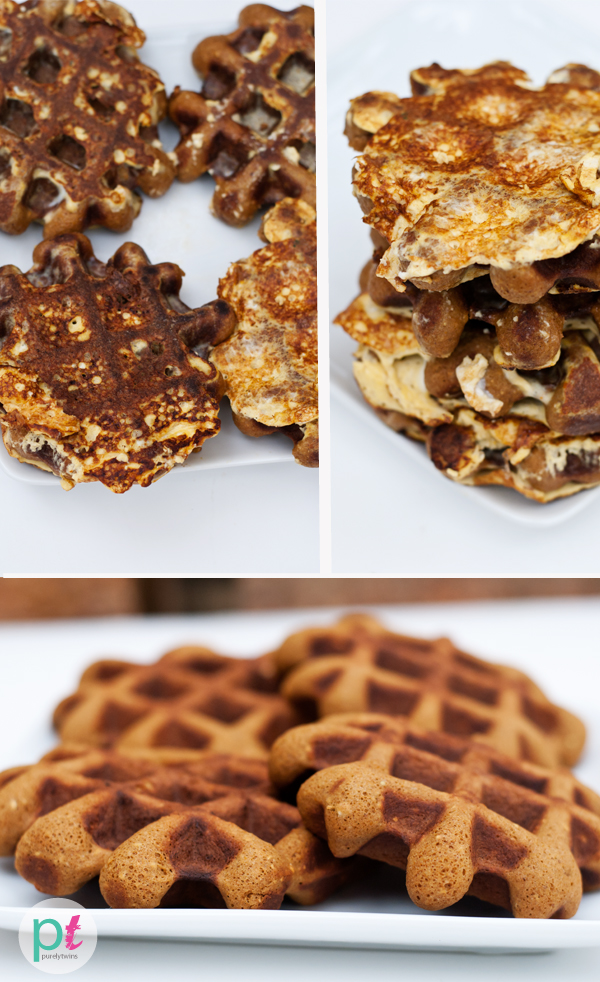 Whatever you want to call them… waffles meet french toast… french toast waffles…they were delicious. And oh soooo satisfying! 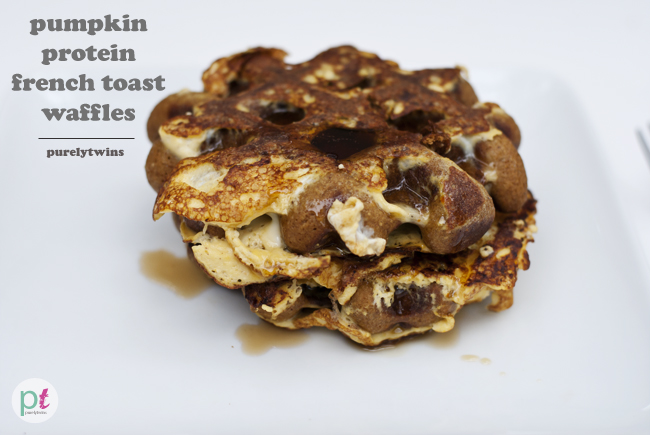 And special thanks to Gary for eating his french toast waffles cold. He waited so patiently while I snapped my (hundreds) photos.  The joys of being married to a food blogger – eating your food cold! Something Michelle and I are used to but our dear guests are so sweet in waiting. 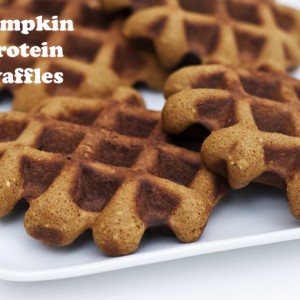 The perfect fall breakfast. Pumpkin french toast waffles that are protein packed. Gluten-free dairy-free waffles. Can be made grain-free. A healthy breakfast!

This recipe was inspired by our coconut flour protein waffles.

Now you can start your day off right with protein packed pumpkin waffles! 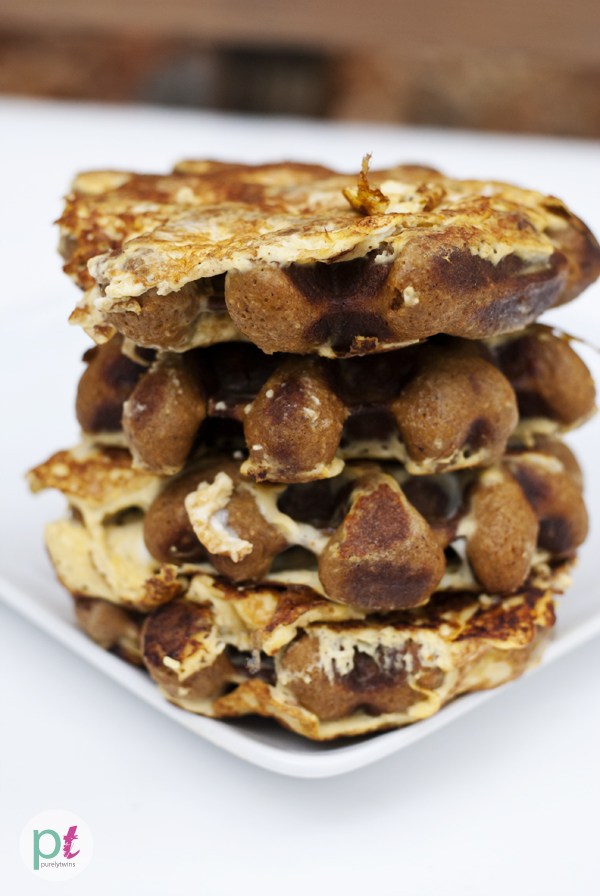 Now with our full french toast waffle bellies off to go have some more fun in the kitchen.

Way to make something delicious even more delicious! I’ve been looking for a waffle maker, but can’t find one without teflon coating. Do you guys have a good one you can recommend with a green non-stick coating?

Ah, such a cool idea girls! Never seen this before. I’ll always go for a waffle before french toast but I’d try a french toast waffle!… with lots of maple syrup and some pecans on top 😉

These look AMAZING. Can’t wait to give them a try. Maybe even throw some fruit in… Maybe! 🙂

oh yes! possibilites are endless with toppings and add-ins!

omg what an awesome idea! Totally trying this 🙂

I love french toast and waffles….a match made in heaven!

Making them! Its about time I got my waffle iron back out!!

I think my waffle maker might be too big for these! Maybe I can make them pancakes?

definitely as pancakes 😉 think that is a great idea 🙂 hugs

These look amazing! I would never think to make french toast out of a waffle! Genius! Even just the waffles alone sound amazing!

These look amazing!! I wonder if they could be made without whole eggs? My naturopath wants me to avoid the yolk for a few weeks…sad times!

sorry to hear that, egg whites should be fine, probably provide a light waffle but still delicious.

not gonna lie. pretty much obsessed with this idea!

seems like the perfect combo! I only love waffles if they have flavor to them, so these would definitely fit the bill! French toast is also one of my favorite things ever! pinning! 🙂

oh my gosh yum! can’t wait to try this out, it’s going to have to be my Thanksgiving day breakfast for sure! 🙂

Do you think these would work with a flax egg? Thanks!!!! If you want to make them pancakes, can you follow the same ingredients?

Not sure how a flax egg would work yet in this recipe, as we have not tested it yet. Yes for pancakes some ingredients maybe increase the milk a little – maybe 1/2 cup instead of 1/4.

OMG! I love this idea!